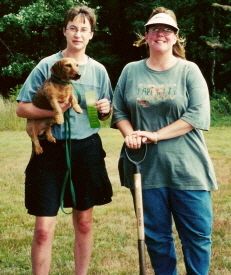 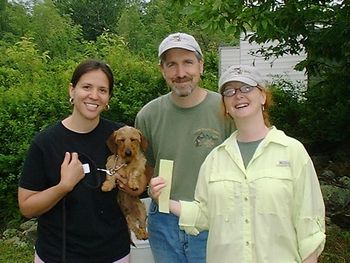 About Earthdog Tests  For generations small terriers and Dachshunds were

bred as hunting dogs to track game above and below ground; to bark at their

quarry in the den and to bolt or draw it for the hunter.  Barking and digging

are what they were bred for all those years, so now AKC has developed the

three levels of Earthdog tests for these game little dogs.

and at the end is a cage of rats behind a set of bars. There is a scent

trail of rat scent leading into the tunnel and to the rats. At this level the

to incite the dog's instincts.

Junior Earthdog title (J.E.)  The first level where a title is earned is the

30 seconds; work the rats at the end of the tunnel (in a cage behind

bars as in IQ) for 60 seconds; and then allow the handler to remove

him without injury to the dog or handler. Once the dog completes

these requirements twice under two different judges he will receive the

title of J.E. and receive a Junior Earthdog certificate from the AKC.

Senior Earthdog title (S.E.). The second level of Earthdog test is the

added distractions of a false, unscented exit and an unscented bedding

area with used rat bedding at the end. The dog has 90 seconds to travel

the tunnel length and get to the rats; must begin working the rats within

15 seconds of arriving at the end of the tunnel; and must work the rats

for 90 seconds. At the end of the 90 seconds the rats are removed and the

dog must recall from the den to the handler within 90 seconds. Once the

dog completes these requirements under two different judges at three

different tests, the dog will be designated a Senior Earthdog (S.E.).

Master Earthdog (M.E.) title The final level of the Earthdog test is

the Master Earthdog (M.E.) title. The dog must actually hunt his

investigate an empty, unscented den when the handler asks him to.

so that there is no question the dog is indicating an active den. The den

itself is like the Senior den with the addition of two obstacles: a 6 inch

down to 6 inches for a distance of 18 inches. The Master competitor has

90 seconds to get to his quarry; must work the rats for 90 seconds and must

allow himself to be removed from the den by his handler within 15 seconds.

with minimum amount of noise while his bracemate works the quarry. Once a

may continue to compete at all three levels at Earthdog tests.Few

small terriers and Dachshunds are regularly hunted to ground by their

owners in natural hunts, but the AKC Earthdog tests allow these game

benefits the dogs and the owners.